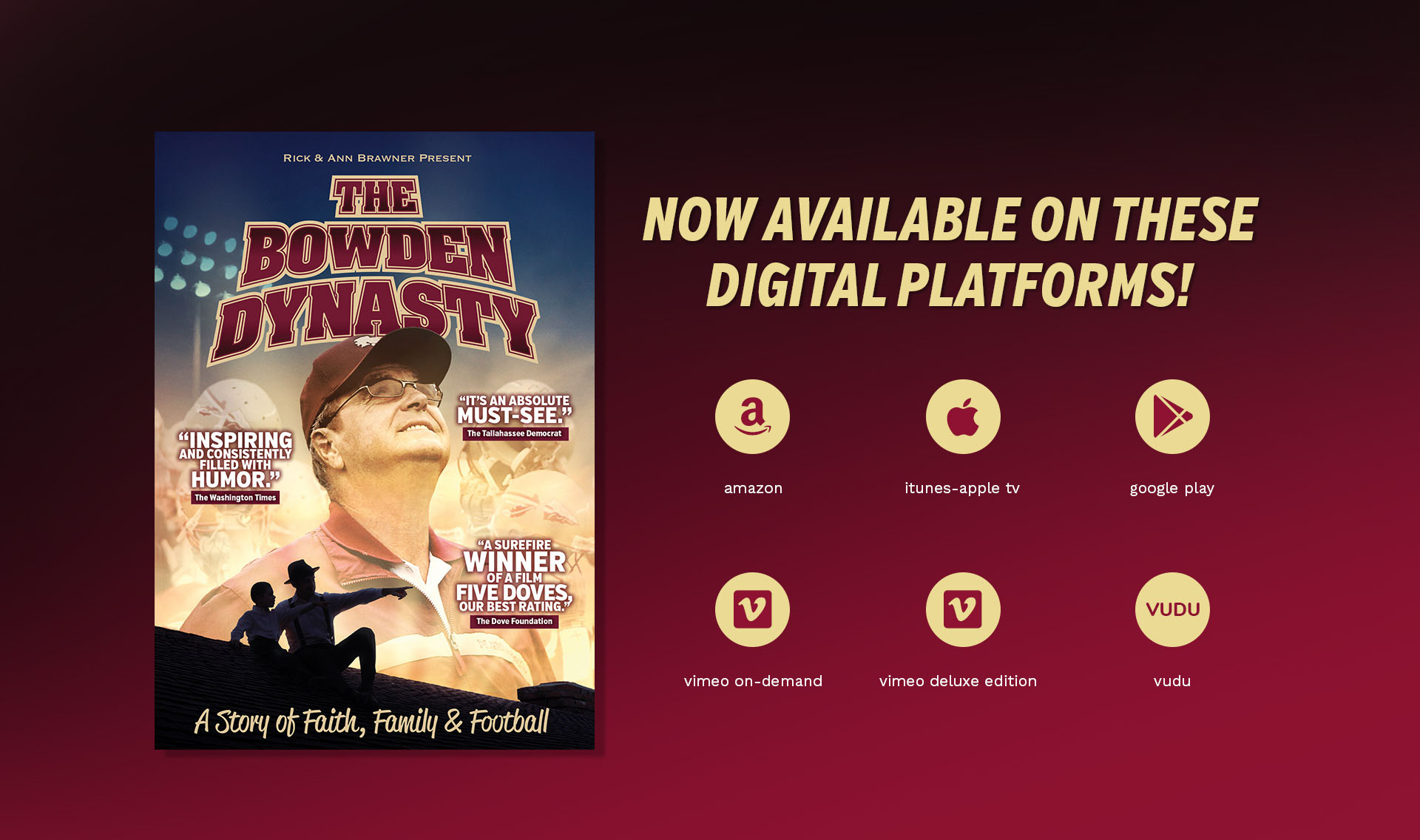 GET THE DVDS AND BOOKS ONLINE FROM GARNET & GOLD STORES!

STAY IN TOUCH AS WE BUILD OUR COMMUNITY

Sign up for our newsletter to get the latest updates and other news.

This story is TOO BIG for the small screen!  Featuring an all-star cast of participants, The Bowden Dynasty film came to over 400 theaters across the country for a one night only LIVE WORLD PREMIERE EVENT on Sunday night January 8th 2017 – on the eve of the College Football Playoff National Championship Game in Tampa Bay, FL.

From veteran TV and film Producer John Corry, along with Rob Harvell and Brian Goodwin, the Producers of ESPN Films’ “The Book of Manning” and “I Hate Christian Laettner,” comes “THE BOWDEN DYNASTY: A Story of Faith, Family & Football”.  This feature-length documentary film explores the life and times of Bobby Bowden, the coach with a team of loyal assistants and players who fought against all odds and countless obstacles to forge one of the greatest achievements in the history of sports.

From 1987 to 2000 the Florida State Seminoles won the hearts of America and thrilled their fans with 14 consecutive ten-win, top-five seasons.  Beginning with a come-from-behind victory in the 1988 Fiesta Bowl, Bobby Bowden’s teams began a flirtation with perfection.  In seven of those seasons they lost only one game.  More often than not, the players’ quest for a perfect season came down to one play where mere inches or seconds determined the outcome.  So just what was the secret to Bobby Bowden’s continued success?

THE BOWDEN DYNASTY extends beyond football, to explore universal themes of family and redemption to which all audiences can relate.  Coach Bowden is legendary for his unyielding faith and “The Bowden Dynasty” examines how he inspired acts of courage and grace while changing the lives of those around him.

For all the accolades bestowed upon Coach Bobby Bowden and his teams for their on-field achievements, the insider stories of the coach and his enormous impact on those around him have never been shared on the big screen.  Now, on the 30th anniversary of “The Dynasty” run, those stories will be told!

THE BOWDEN DYNASTY features an ALL-STAR CAST, including:

All media inquiries should be directed to DYNASTY PRODUCTIONS GROUP.  Email: BowdenDynasty@Gmail.com