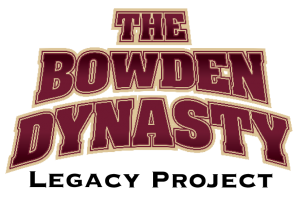 We wanted to make a film that was about those amazing teams, not just me.  Millions of people watched the Florida State Seminoles during the 14 Dynasty years and I hope we showed that you can win by doing things the right way.

Our film pulls back the curtain to reveal the heart and grit of the men and women behind those exciting teams.  These are stories that need to be shared!

My dream is for this film to be placed in every school and church in the country.

JOIN OUR CHARTER TEAM OF CONTRIBUTORS!

Share the BOWDEN DYNASTY with 25 to 1,000 schools through our LEGACY PROJECT!

“It is a rare opportunity, indeed, to be able to say thank you to a living legend in such a tangible and visible way.” - FSU All-American and Pro Football Hall of Famer Derrick Brooks